Holidaymakers and travellers getting ready for the half-term getaway tested the new, super-fast network 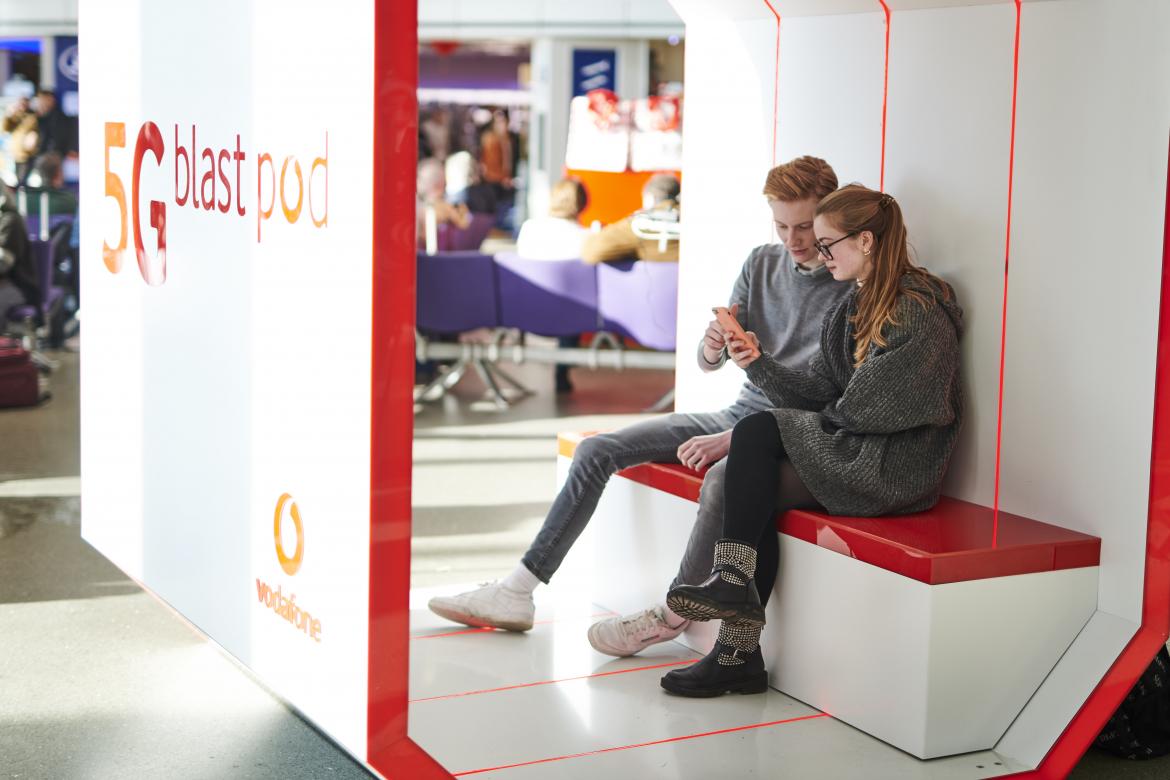 Vodafone has switched on 5G at Manchester Airport, with other travel locations set to follow suit within weeks. In a UK first, holidaymakers and travellers getting ready for the half-term getaway tested the new, super-fast network by downloading a film or TV box set using 5G.  The testers downloaded content up to four times quicker than over 4G - providing them with more than enough entertainment for their flight.

Manchester Airport is the first of several travel hot spots where Vodafone is trialling 5G. Vodafone 5G masts are now in place at the airport, forming part of the 5G trials taking place across the city.  Further trials over the coming weeks will include Snow Hill railway station in Birmingham.

Passengers at Manchester’s Terminal One visited Vodafone’s special 5G ‘blast pod’ and were given a free Entertainment Pass on streaming service NOW TV*. Airport users could download an episode of the new series of Tin Star in 45 seconds and the whole series in six minutes and seven seconds - up to four times faster than over 4G, which took 26 minutes and eight seconds**.  At these speeds, Vodafone’s 5G network will allow a home Wi-Fi like experience, on the go.

5G will enable holiday makers and business travellers to load a web page or a video instantly and, thanks to super low latency, people will be able to seamlessly stream a movie over 5G without buffering or lag.

“We all love to catch up on our favourite TV shows, play games or finish off some work when travelling. 5G, with its fast speeds and quick response times, will make that quick and easy, even in busy locations. We are proud to be the first provider to bring 5G to an airport and will be adding more major travel hotspots to our 5G network throughout the year.”

“We are delighted to support Vodafone’s 5G trial at Manchester Airport. As we progress with the design and delivery of our £1bn transformation programme, we are constantly exploring how new innovations and technology can be applied to improve the airport experience.

“As a business with a strong presence in our surrounding community, Vodafone was a natural partner for a trial project like this and we look forward to collaborating with them again in the future.”

As 5G handsets are not yet available for consumers, Vodafone completed the trial using its ‘Gigacube’ device – a portable router that is 5G enabled. Consumers connected to 5G via the Gigacube and used their Now TV Entertainment Pass to download and stream content. (More technical detail available in the notes to editors).

With faster speeds, low latency and increased capacity, 5G has the potential to revolutionise our day-to-day lives by enabling smart airports and roads, as well as better connected cars, businesses and homes. It will act as a catalyst for emerging technologies such as artificial intelligence, Internet of Things (IoT), robotics and connected cities.

This latest 5G trial follows Vodafone’s successful test of 5G spectrum across a live network in April 2018 and the UK’s first 5G holographic call in September 2018.  You can watch the full video here: https://youtu.be/4Fqx_ajP4Hw.

*Customers who sign up to Vodafone’s Red Entertainment plans can choose to receive a NOW TV Entertainment Pass for the duration of their contract.

Technical detail: The trial used 5G with Active Antenna (or Massive MiMo) technology at Manchester Airport – a wireless network that allows the transmitting and receiving of more than one data signal. This creates multiple 5G ‘motorways’ from one antenna, which are then beamed to a 5G router to create a fixed wireless access connection for many users. This allows any device with Wi-Fi to connect to the router and benefit from a high-speed data connection. 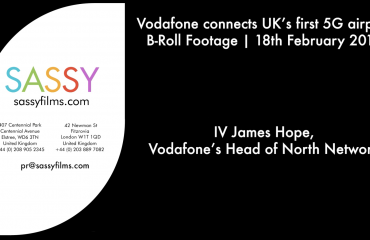 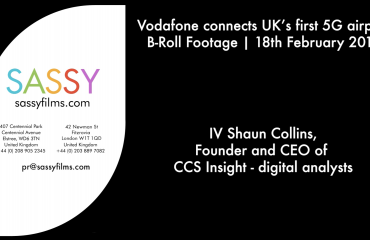 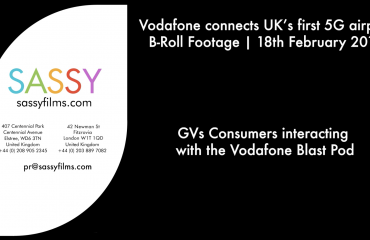 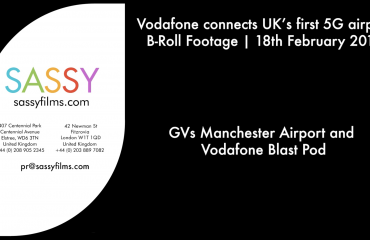 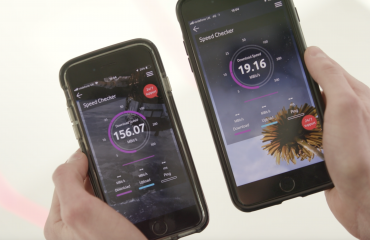 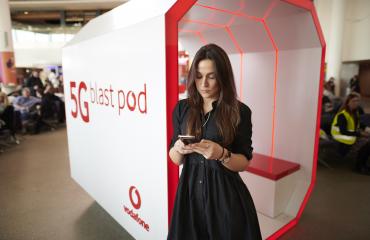 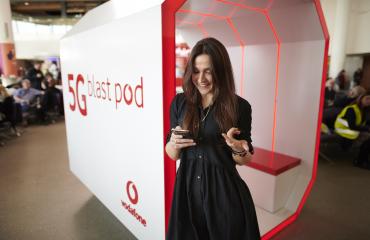 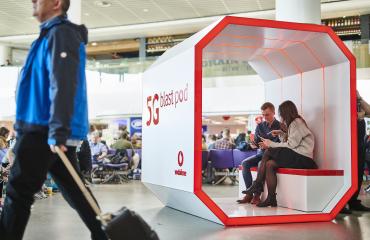 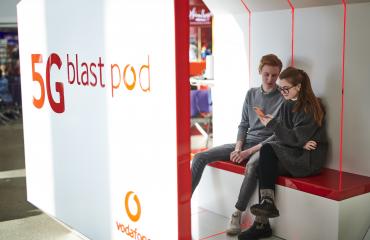 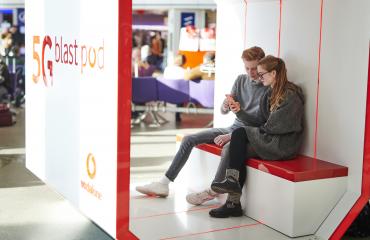 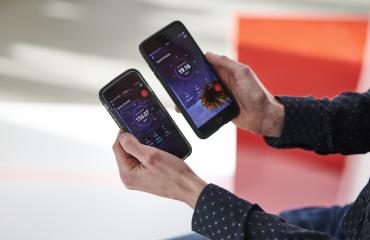 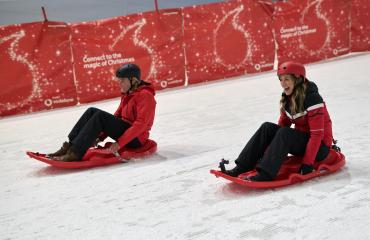 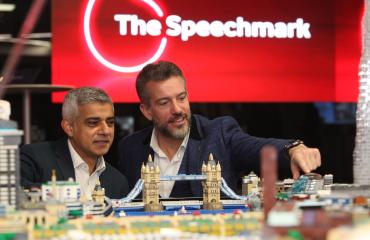 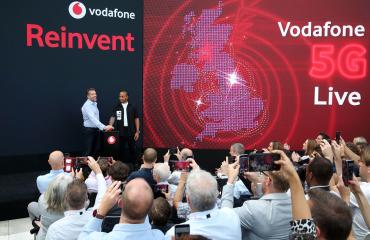 Vodafone Switches on its 5G Network